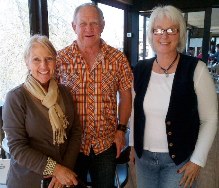 Three Pietermaritzburg Chamber of Business members – Shân Cade, Desiray Viney and Nicky Grieshaber – are pooling their skills and are leveraging their PCB networking opportunities when they host a combined workshop on August 23 at the Howick Falls Hotel. Cade, well-known for her CLIP System, Viney of REAL Communication Consulting and Grieshaber from Simply Clearer will combine their diverse skills into a single training product, a three-way interactive workshop that covers several aspects, including managing administration risk, and understanding that PR is not just marketing, and understanding language differences in the workplace. Aimed at frontline personnel and supervisors, the workshop plans to offer valuable tools for improving their productivity and performance – no matter what their job is. The trio brings complementary skills to the workshop – Cade will get participants to develop a holistic view to sustainable business and embrace a check list methodology as a control tool within the work environment.

This in turn manages risk, cost, continuity of service, consistency and ultimately customer service excellence, making each participant a valuable thinker in the workplace. Viney is a communication and media specialist and having recently moved from the academic to the business world, she now consults with companies and individuals on anything relating to corporate communication, public relations and the media as well as values-driven leadership. She has presented papers on several topics, including developing responsible leaders through the media, and corporate and government communication regarding social issues. Grieshaber, a professional language practitioner and workshop presenter, has plenty of practical experience to match a sound academic background. He has an easy manner and the ability to make complicated theoretical matters easy to understand. One of his special interests is the communication barriers experienced by both speakers and hearers when second or third languages are used. The workshop is organised by Cade who can be contacted on 078 801 0896 or shan@shancade.co.za .

What do you think of Mac Maharaj’s handling of the Mandela crisis situation?
How does his PR style contribute to brand Mandela and the public’s perceptions?
Maharaj lashed out at the media for broadcasting unverified information about the state of Madiba’s health. A member of the Mandela family accused the media of being overly-intrusive, “vulture-like”, preying on the ailing old man. They speak as though this is an average suburban 94 year old man, needing privacy as he nears his end while his traumatized family start mourning and feuding. Many citizens also believe the media should “leave Mandela alone”. But is that possible – given the man’s global position as an iconic statesman and a symbol of freedom, democracy and human rights? And given that, for the past 3 decades. the government has been ‘selling’ Mandela to the world as the one true embodiment of a perfect South Africa, the Rainbow nation – he has become a brand! He left behind any notion of being a private individual when he chose to represent the ANC and the people in the struggle for freedom and democracy until his death. He is ours and the world’s.

Apart from the issues of media ethics and privacy vs public interest, we should also take a look at what the role of a spokesman is in terms of public relations and government relations. It is quite clear from this that in government communication – and this is government communication – relationships between politicians, media professionals and the public impact the quality of democracy. And this needs to be interrogated.
According to most Public and Government Relations theorists and practitioners, the task of government communication is not about “pleasing customers”, but informing tax-paying citizens. And in times of crisis PR people have to be particularly ready to inform the public to avoid any misconceptions, rumours and unverified information circulating.

In this unique case, being Mandela’s private spokesperson involves also being a government spokesperson because of the nature of the ANC/Mandela relationship. So why does Mac Maharaj “shield Madiba” by conducting press conferences at his own convenience, subtly distorting or hiding information or not disclosing the true facts of the situation? His task is to turn the speculation into facts by his visibility and ability to share information – good or bad – with the nation. However, because of the choice and tone of his disclosures and expositions he may be accused of exacerbating exclusion and division, instead of drawing citizens together at this pivotal point in our democracy. The question then becomes, is he being a good spokesman for Mandela and/or the ANC government?

Now, make no mistake, everybody loves Nelson Mandela and everything he stands for but they resent the way that those around him choose to change their stance on his relationship with the media to suit their own agendas. What was the idea behind propping him up for the cameras surrounded by the ANC cronies when the word was spreading globally that Mandela would be horrified by the state of the ANC today. That was their last chance for a photo opportunity to insinuate that he approved their actions, when in fact he was so ill, he would have sat with any group had it had access to him! Who did this caper please – citizens or ANC customers? I recall there was a major public outcry by concerned citizens.

What do you think of Maharaj’s handling of the Mandela situation????