Ethical branding and sustainability trends for 2015 and beyond

There is so much talk of sustainability, ethical branding and how to strategise a company’s CSR programmes and efforts, to make ‘being good part of good business.’ 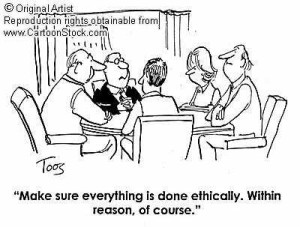 Corporate governance and CSR – is it for REAL?

I have found two interesting items on this topic. The first, a delightful, creative and easy-to-understand ‘story’ about becoming a ‘conscious industry.’ I love it. But my question is, who sees it, who is learning from it and who is doing it? This is a resource that should be circulated to every single business in this country. To experience it, visit: www.ogilvyearth.co.za

The other, EthicalCorp’s report on sustainability trends for 2015.
Ethical Corporation is hosting its 14th Annual Responsible Business Summit in May this year at which over 300 executives from across the globe will discuss the future of responsible business.
As a precursor to this prestigious event, Ethicalcorp conducted a survey to assess the current issues and trends in sustainability. What emerged from the 472 responses were the 3 top international priorities in 2015:
1. Embedding CSR
2. Creating a Sustainable Culture
3. Sustainable innovation
30% of respondents stated that sustainable innovation was the most exciting opportunity for their company in the next five years.
Nearly 25% stated that their companies were driven by sustainability. The hope is that this would increase as sustainability becomes more embedded in R&D and permeates through the organisation.
Visit: www.ethicalcorp.com/rbs

I say, there’s too much talk and not enough will for action!

Some thoughts and comments on the PRISA conference held at Emperor’s Palace, Kempton Park on 9 and 10 June. The theme was “Managing Reputation on our Threatened Planet.”

As a Corporate Communication and PR consultant focussed on reputation management, I felt I had to attend. It would be the place to meet the movers and shakers, the decision makers of PR in South Africa. A great opportunity to network and meet people I could do business with……

But sadly, there were very few private business owners there, and the quasi-government organisations were represented by people unable to talk to me about possibilities. So I didn’t achieve my goal of finding connections for future work.

Regarding the speakers, the line-up on the programme was impressive, starting with Prof Jonathan Jansen, vice-chancellor and rector of the University of the Free State. In his usual irreverent style, he criticised the education department for not demanding excellence, and the general lack of a moral compass in a government that did not know the difference between social justice and transformation, between position and influence and between saying and doing. My favourite line: “Why don’t big business deliver textbooks?”

The very humbly gracious Advocate Thuli Madonsela, accepted the PRISA President’s Award and spoke on the impact of the Public Protector’s work on SA’s reputation.  Not a charismatic speaker, but wow, she spoke her truth, exuding honesty, quiet commitment and brave tenacity. She was so impressive! Best line: “I am a servant.”

Another speaker I enjoyed was Trevor Ndlazi, of the Reputation Institute. Reputation management is one of my special interests, so I was very pleased to hear that “Reputation IS a tangible asset that needs to be managed”!

Paula Fray, a media expert with a focus on development communication, was a very engaging speaker who clearly knows what she’s talking about from years of experience. You can’t beat that.

New kid on the media block, and very popular, is Emma Sadleir, a social media legal consultant, who puts the fear of g-d into you with her stories of how tweets and social media messages, if not monitored and managed, could cause a whole lot of trouble for your company’s reputation.

There were many other good and interesting talks and presentations over the two days, but the one that stands out for me is the presentation entitled “stakeholder interventions” by Nazir Allie, CEO of SANRAL. This is definitely the most inappropriate talk of the conference as it clearly showed how NOT to deal with your stakeholders! PRISA staff must be kicking themselves for such a bad choice! All Allie did was blow SANRAL’s own trumpet, and make it very clear that the only stakeholder SANRAL considers important is government legislators. Very little respect was shown to other stakeholders like the public. He firmly believed that the public must pay for what the government spends on social grants etc. Sadly, Allie has no concept of building and managing his organisation’s reputation. Great pity.