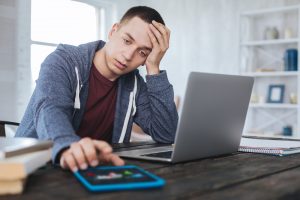 In the blue. Miserable young man sitting at the table and looking at his phone

You’re sitting at home wondering “what next, what do I do, what’s this virus all about?” Bombarded with messages on all platforms and media, you’re befuddled. What’s true and what’s not?

What’s fake news?
‘Fake news’ has been around a while. But what does it mean when we’re communicating about the coronavirus – COVID-19 and how does it affect our interpretations and how do we respond to it?

All of the above. Definitions of fake or hoax news include: “false information, published under the guise of being authentic news, to mislead and spread misinformation via social networks and word-of-mouth,” and
“completely made up news designed to deceive readers to maximize traffic and profit. News satire uses exaggeration and introduces non-factual elements, but intended to amuse or make a point, not deceive. Propaganda can also be fake news.”
According to Mind Tools, there are two kinds of fake news:
1. Stories that aren’t true: deliberately invented stories designed to make people believe something false, to buy a certain product, or to visit a certain website.
2. Stories that have some truth, but aren’t 100 percent accurate: biased, and aimed to convince readers of a certain political or ideological viewpoint.

There are also people who claim that factually accurate stories are fake news, just because they don’t agree with them or find them uncomfortable. Trump perhaps?

Where Does Fake News Come From? 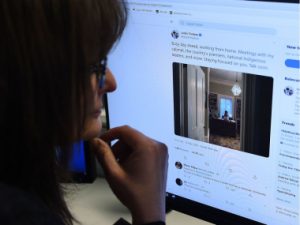 Getting info from Social media

What is new is how easy it’s become to share information – both true and false – on a massive scale. Social media platforms allow almost anyone to publish their thoughts or share stories to the world. But the trouble is, most people don’t check the source of the material that they view online before they share it, which can lead to fake news spreading quickly and going viral.

At the same time, it’s become harder to identify the source of news stories, particularly on the internet, which can make it difficult to assess their accuracy. But not all fake news stories are found online. Friends, family and colleagues who gossip and share or publish info without checking their facts, for example, are also guilty of spreading misinformation, even if inadvertently.

“There are activists out there, it’s the same thing as people setting fires. Some of these people are trying to stir up emotions; in other cases, it’s just sheer stupidity.
“The same people who buy into conspiracy theories are the best breeding ground [for sharing fake news].”

You darn right we should be afraid, very afraid, especially at a time of uncertainty, fear and anxiety when people are reaching out for facts and reassurance.
William Bird, director of Media Monitoring Africa, told News24 there had been a significant spike in fake news and conspiracy theories since the outbreak of the novel coronavirus.
“This kind of thing is increasing. That specific complaint [about the contaminated swabs] was submitted to us several times. There are also several illegitimate WhatsApp voice notes being distributed. People are sending them around in the hope that they sound a whole lot more compelling [than they are] or that they connect with people – it’s a similar thing with videos. 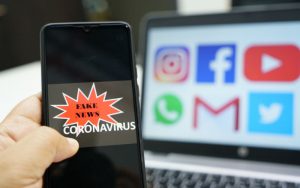 Bird said fake messages were in the past predominantly shared on open platforms such as Facebook and Twitter, which made it easier to control, but that there has been a predominant shift to WhatsApp, where it is much harder to track or monitor.
“Some people make statements that are just fundamentally misinformed because they haven’t applied their brains or logic, so there is some level of ignorance. But some of them are deliberately seeking to deceive people and instil fear or get people to distrust things.”

Social media lawyer, Emma Sadleir, said that, as much as we are facing a health epidemic, we are also facing a fake news epidemic. “Whenever emotions are heightened, it creates a breeding ground for fake news. In some cases, these spreaders of fake news seek to profit from it, while others are using it for political gain, particularly when they have a specific narrative.”

Referring to the man who posted the testing swab video, Sadleir said his Facebook page was filled with various conspiracy theories and misinformation. [Follow the Stephen Birch case where he was prosecuted for a post that claimed the DoH’s testing kits were contaminated.]

“I think when it comes to the regulations of the Disaster Management Act, and the intention to deceive, we have to read in there dolus eventualis – where there is recklessness with regards to the truth, you’ve made that requirement of intention to deceive, which is a criminal offence that should come with a prison sentence or a fine. I believe that they are going to make a test case out of this guy.”
Sadleir warned people not to share information unless they are 100% sure that the source is credible, and the information has been verified.

Social media expert, Arthur Goldstuck, believes fake news completely destroys public discourse and undermines democratic values: “Anyone who participates in this in order to advance their objectives should realise the long-term damage. It ultimately renders everything they put out untrustworthy.” He believes there should be consequences and prosecutions.

‘Do the crime, do the time’
National police spokesperson Brigadier Vish Naidoo previously told News24: “People mustn’t think that they can post these videos and fake news and think they can get away with it. We have the capacity and capability of tracing them. If they want to do the crime, they must be prepared to do the time.” 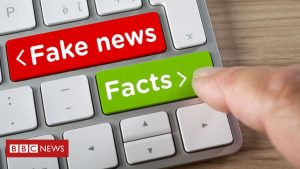 Surely, it’s easy to tell fake news from real news? Actually, no, it’s not. People are too quick to assume that if it’s on social media and Whatsapp, it’s true.
A study by Stanford’s Graduate School of Education assessed more than 7,800 student responses on their ability to assess information sources. Researchers were shocked by students’ “stunning and dismaying” inability to evaluate information at even as basic a level as distinguishing advertisements from articles (from The Guardian article by Elle Hunt).

Fortunately, there’s a lot you can do to separate fake news from the truth.
It’s vital to know how to separate the real from the fake. According to Mind Tools, you can do this by following these six steps:
1. Develop a critical mindset.
2. Check the source.
3. See who else is reporting the story.
4. Examine the evidence.
5. Look for fake images.
6. Check that it “sounds right.”

There are several fact-checking websites dedicated to assessing the credibility of stories, like www.snopes.com and africacheck.org And people are encouraged to report fake news to real411.org. It gets reviewed by experts and then action is taken.
Facebook also may flag stories of questionable legitimacy with an alert that says “Disputed by 3rd party fact-checkers”.
Melissa Zimdars, a professor at Merrimack College in Massachusetts, compiled a list of websites (https://www.dailydot.com/debug/fake-news-sites-list-facebook/) that either purposely publish false information or are otherwise entirely unreliable. 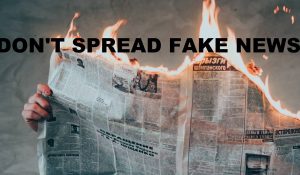 We need to be smarter at recognising and combating news that is fabricated especially around a topic as seriously impactful as COVID-19.
“Share responsibly”, says Hunt, “you are an influencer within your own social network: put in the legwork, and only post or share stories you know to be true, from sources you know to be responsible. You can help shape the media you want, too. Withhold “hate-clicking” on stories you know are designed to make you angry”.
Rely on the words of The World Health Organisation (WHO), The Department of Health, Registered, verified and accredited researchers and health professionals and news organizations. Engage responsibly with social media and only pay for journalism and news that have real value.