What is ‘fake news’? And how does it affect us? 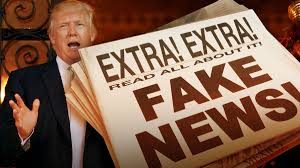 Have you noticed how this ‘catch-all’ confusing media term is being used every day? Donald Trump uses it to describe any news he doesn’t like, doesn’t agree with, or that doesn’t come from his own tweets. And although we associate the term with Trump, stories involving ‘fake news’ have been around for a while. But what does it mean in our hi-tech social media world and how does it affect our own interpretation of news and how we respond to it?

All of the above. One definition of fake news, or hoax news, is “false information or propaganda published under the guise of being authentic news. Fake news websites and channels push their fake news content in an attempt to mislead consumers of the content and spread misinformation via social networks and word-of-mouth” (www.webopedia.com/TERM/F/fake–news.html).

Wikipedia defines it as news which is “completely made up and designed to deceive readers to maximize traffic and profit. News satire uses exaggeration and introduces non-factual elements, but is intended to amuse or make a point, not deceive. Propaganda can also be fake news”   https://en.wikipedia.org/wiki/Fake_news .

In The Guardian, Elle Hunt explores ‘fake news’:  “Until recently, there was news and “not news” (referring to human interest stories or features). Now there is ‘fake news’, said to be behind the election of Donald Trump as US president. The US election result was influenced by a widespread belief in fake news among Trump supporters. 73% of Trump voters thought the billionaire financier George Soros paid protesters to disrupt the Republican candidate’s rallies – a fake news report later repeated by the president-elect himself.”

Other fake news includes a report that Democratic senators wanted to impose sharia law in Florida, and a false report that Trump supporters chanting “we hate Muslims, we hate blacks, we want our great country back” at a rally was reported as true on election night. 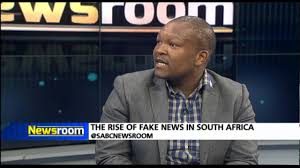 According to Verlie Oosthuizen, a partner at Shepstone and Wylie’s social media law department, “Fake news – which previously targeted celebrities – has shifted to politics; Donald Trump’s election shows the impact of this growing trend on politics”.

Xolani Dube, from the Xubera Institute for Research and Development, believes what is now termed fake news has been around since the inception of power. “Pre-information age, fake news was called propaganda and preserved in print media and radio. It existed by other names before that. For anything to sustain itself it needs to rebrand, so it is appearing now as fake news, electioneering sabotage.”

Sabotage had allegedly been the aim of the work of an ANC team called the “War Room” in the run up to the local government elections. Allegations that its goal was to create posters depicting opposition political parties negatively, were contained in a court application by Sihle Bolani. The public relations strategist fingered Shaka Sisulu, Walter Sisulu’s grandson, as her recruiter, as did Thami Mthimkhulu, a Durban man who claimed – on Twitter – that he had been sent slanderous posters of EFF and DA leaders to share and “push” on social media.

The proliferation of fake news targeting political parties and politicians is “new-age propaganda” that is not likely to stop and political leaders have to brace themselves for the online onslaught. This is according to a social media lawyer and a researcher, who were responding to allegations that the ANC spent R50 million to spread fake news and pay social media “influencers” to discredit the political opposition. Many commentators agree that as the ANC succession debate heats up, South Africa could expect even more fake news. So be aware….

Social media expert, Arthur Goldstuck, believes fake news completely destroys public discourse and undermines democratic values: “Anyone who participates in this in order to advance their objectives should realise the long-term damage. It ultimately renders everything they put out untrustworthy.” He believes there should be consequences but “until someone is caught and prosecuted, it will go on”.

Analysis by BuzzFeed found that fake news stories drew more shares and engagement during the final three months of the US election campaign than reports from, for example, the New York Times, the Washington Post and CNN.    The power of this ‘fake news’ is clear.

Surely it’s easy to tell fake news from real news   Actually, no.   A recent study carried out by Stanford’s Graduate School of Education assessed more than 7,800 student responses on their ability to assess information sources. Researchers were “shocked” by students’ “stunning and dismaying consistency” to evaluate information at even as basic a level as distinguishing advertisements from articles (from The Guardian article by Elle Hunt).

Soon, Facebook will flag stories of questionable legitimacy with an alert that says “Disputed by 3rd party fact-checkers”. Melissa Zimdars, a professor at Merrimack College in Massachusetts, compiled this list of websites that either purposely publish false information or are otherwise entirely unreliable, broken down by category.

The German chancellor Angela Merkel, pressured Facebook to introduce a fact check button to try to deal with fake news. This is already effective in the US as well and whether Facebook is going to mobilise this across the globe remains to be seen.

“I don’t believe there is a political will in South Africa to put up the same kind of pressure,” said Oosthuizen.  “Trying to prosecute the creators of fake news sites would be extremely difficult. You’d end up chasing leads in different jurisdictions.”

So we’ve deduced that fake news is intentionally created and can discredit stories and the people in them and lead us to believe that something is true when it’s not. So we need to be smarter at recognising and combating news that is fabricated.

Pay for journalism and news that have real value.